Building the foundation of the world’s most downloaded banking app

As Nubank shifted from a credit card company to a more robust banking ecosystem, it became evident the need for a more cohesive interface for our products.

Different patterns accross the app hindered user onboarding, feature discovery and didn’t optimize for new and important product offerings. The current designs weren’t flexible enough to accomodate new features. Over 3½ months, I redesigned the experience for credit card and partnered with other two designers to revamp the savings account interface.

in revenue from instalment anticipation

A couple of months before I started working on the dashboards the Nubank app got a new home-screen. The new interface opened doors for a multi-product scenario and consisted of two main elements:

The new home screen was succesful at giving more visibility for the savings account and rewards program, but also highlighted the inconsistencies in the UI, navigation and gestures. 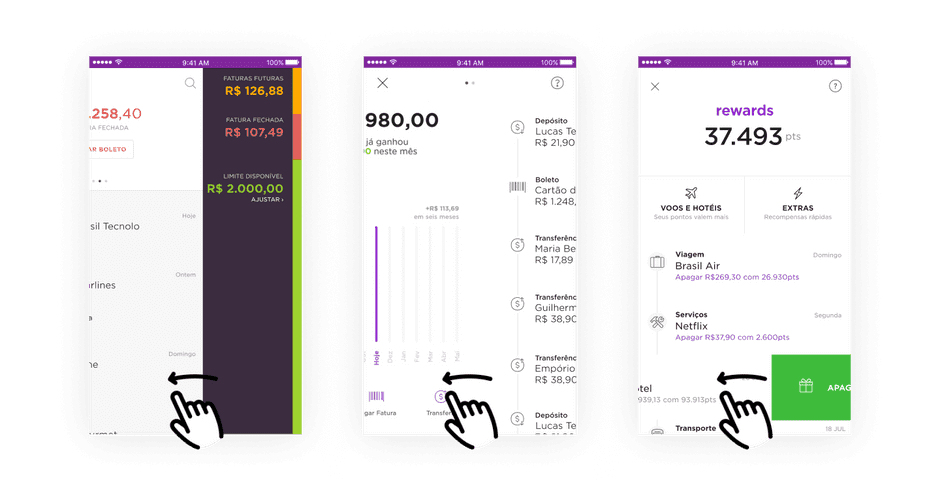 Users needed to learn how to use 3 different interfaces and we were distancing from Nubank’s “fight complexity, empower people” motto. We were onboarding over a million customers per month and our app urged a new product structure for both NuConta and the Credit Card.

I wore a Product Designer and Product Manager hat in this project. I was responsible for pitching it’s importance, getting a team staffed, designing the user interface and then guiding prioritisation and stakeholder management.

Here I’ll cover the story of how I got it prioritised it and some of the key design decisions I made.

The first thing to get this project in our roadmap was to build a strong business case, demonstrating the value a new interface would have on the business.

Since credit-card was the oldest user interface I had a ton of user and peer feedback to start with. Besides reading, clustering and selecting which user problems were the most important to solve, I partnered with a number of engineers and data scientists that helped me understand and list down technical constraints and business opportunities.

I grouped all user, tech and business problems the new interface should address and shared it with multiple teams and functions across the company to gather feedback.

Here are some of the problems I aimed to solve with the new interface:

and optimise it for more product experimentation

After setting design principles for the new design I started exploring broad directions that could address the problems and opportunities identified.

I ran weekly Design Critiques with the Mexico and Brazil teams, bringing voices from Engineering, Product, Data Science and Product/Brand Designers to refine the new interface. 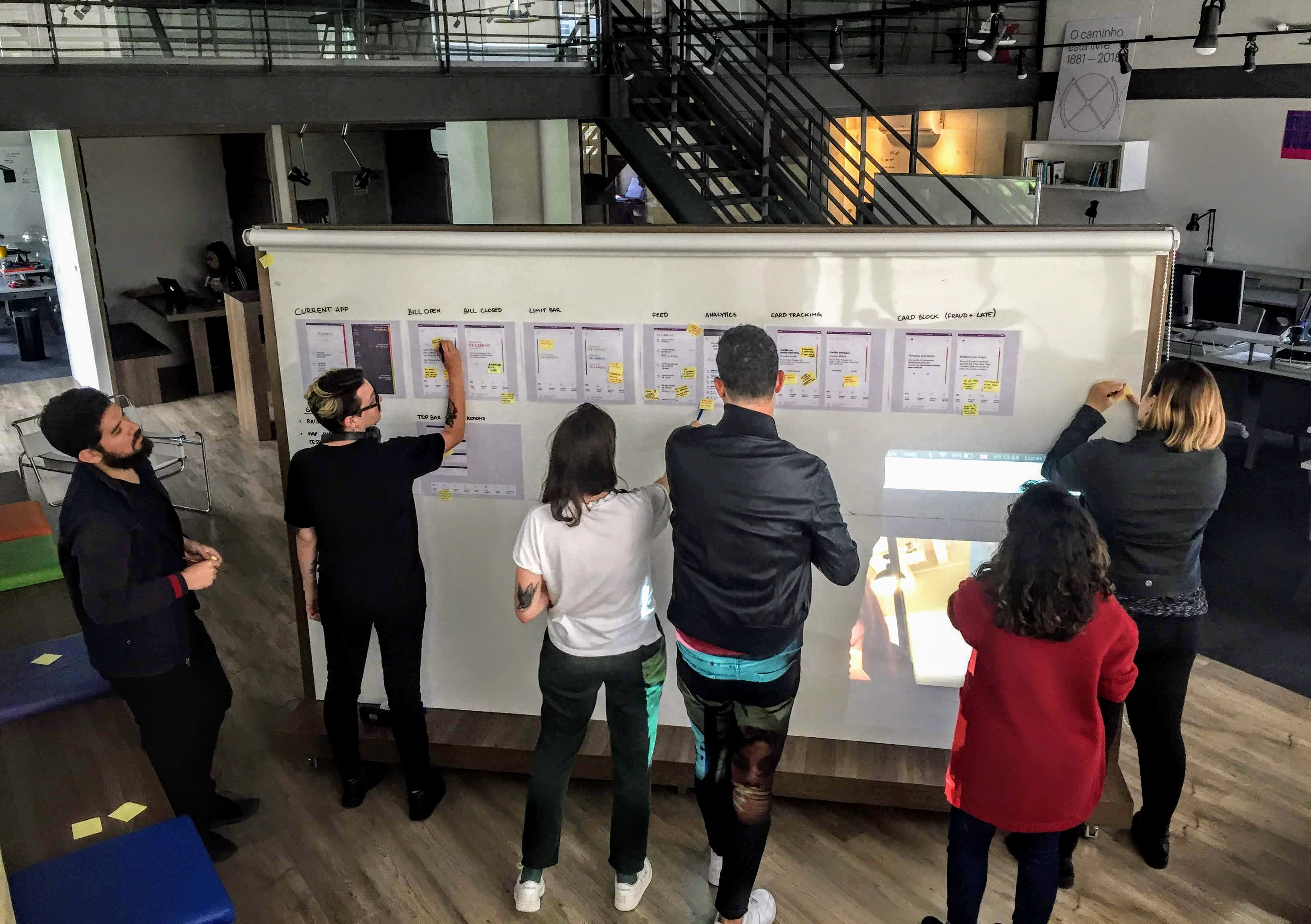 One of many critique sessions
Early on I prefer paper, sticky notes, thick pens and pointing over pixels on a screen 🙃

Rounds of critiques and working with other two colleagues on the savings account pointed that the alternative that seemed to scale best across products was a vertical stacking of:

Here’s how this structure translated in the final design for Credit Card:

It’s no secret dealing with financial services can be overwhelming — or even daunting. Information should be easy for customers to discover, understand and feel confident about making a decision.

The new hero is more prominent than it used to be, highlighting the most important and contextual information like current bill states, limit information or action required states.

Pagination indicates there’s more on the swipe, preserving the gesture for old users. Checking limit bar details. Over 76% of new customers check their limit utilization within the first week with the product — as opposed to the previous 48%.

More pages can be added (as long as they follow a set of defined rules) and all content (text, illustrations, icons, buttons) can be customized via backend (valuable for experimentation and international expansion).

Using better patterns in the feed to afford tappability went a long way in educating customers about the an extra level of information about the transaction. The number of disputes opened via the self-serviced app increased 4 percentual points (p.p) while reducing by 3p.p the contacts via phone/email.

Besides adding a chevron › to convey tappable feed items, I also solved a couple other legibility issues. The first of them, was to align amounts to the right — so customers can browse items either by scanning merchant names or transaction amount.

I also opted for tabular numbers so they would align vertically. Here’s the difference:

Actions and navigation at the center of the stage

Bringing actions from the purple screen to the action swiper also increased in 11p.p the number of customers that now check past bill statements.

Colors are used to comunicate limit utilization and bill states. The previous palette worked well on the dark purple background but as the app shifted towards a white background, the green, blue and orange had poor contrast on white. 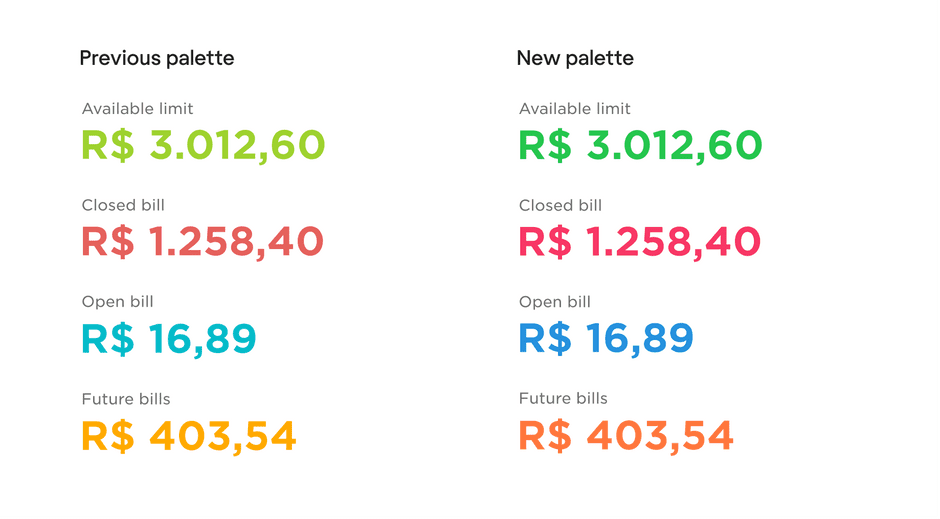 In addition, I also dedicated a ton of attention to the tags, hints and traits to ensure visually impaired customers had the same quality.

I started working on the evolution of the savings account (NuConta) interface around 6 months after it’s launch, along with other two designers.

At that time, Mateus P. and I were working on the yet-to-be-released personal loans product while Lucas N. was exploring ways to help customers separate money. After a few rounds of user interviews, it was clear: *our features would struggle to coexist in NuConta’s main screen. *NuConta’s 6 months old interface was already bloated.

Open the way for NuConta's growth.

Some of the questions and challenges faced:

Having defined the main goals, I spent several afternoons pairing with my colleagues in the Design Studio. For every new concept I also explored how it would be translated to the Credit Card interface – and then, brought back a new idea that could be used for the savings account too.

Informed by data, not driven by it

While most respondants said they found the graph helpful, that was never translated in people’s stories with the product. We decided to move with a much smaller version of the graph. Giving more emphasis to the numbers went a long way helping customers understand what was going on with their money at a glance.

Here are some of the key decisions made over six weeks of work.